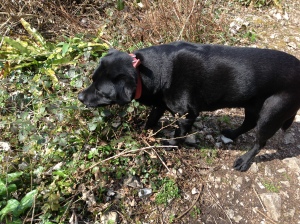 It’s half term, both children at home. Given their dysfunctional love/hate relationship that’s always stressful, but good news for the dog – one of them at least. Our piggy labrador gets plenty of opportunities to sneak upstairs and eat the cat food. She is masterful, waiting until attention is elsewhere and the doors left open, which sooner or later they always are. Not so good for the cat, who then has to parade up and down in front of me meowing until I notice that her bowl has been licked clean, again.

The kids feel unsafe together, even at fourteen and sixteen, without an adult present. We separate them when possible, or take it in turns to leave the house, but today Tony was working and I was at home. I needed to go to the post office then walk the dogs, and had only been gone about ten minutes when Billy phoned to say that I needed to come home. That they, not the dogs should be my top priority, and he wanted me to take him to get a haircut. He is a long way off being able to walk into town to go to the barbers on his own, and this level of dependence makes him a bit edgy and aggressive towards me. I was in the woods about ten minutes later when Jo phoned. I had to come home straight away because… I forget what exactly but they were squabbling and Billy wouldn’t leave Jo’s room or stop fiddling with her things. Apparently Billy was wearing his only pair of clean jeans, which had a tear in them. He didn’t want to wear them in town, and tried to get Jo to sew them up, while still wearing them. I suggested he change into tracksuit bottoms and I could then mend them quickly  when I got back. This wasn’t acceptable apparently, but I haven’t heard any more about torn jeans so far. Not exactly a relaxing walk. We still approach the house with some trepidation if the children have been home alone – looking out for broken windows, obvious signs of a fight, loud shouts and bangs, or smoke escaping from a door or windows. We had an outbreak of good behaviour when they tried to get me to pay for an Xbox game that they could download onto both their machines. As Jo has very few games that she likes or can play I wasn’t against the idea, but didn’t want it to be a  free gift. I said they needed to do some chores, and they did at least go and tidy their rooms. It’s not exactly doing something for me, but still better than nothing. They continued to phone from Billy’s room to my study on the floor below. Billy was trying to strangle Jo or something. I think they just need the reassurance that I’m still around and within reach as they both have trouble regulating their behaviour.

Billy had taken my letter about having to take responsibility for keeping his bedroom tidy pretty well, and at least made an effort to put dirty clothes in a laundry basket. He had asked for a bigger bin, so I bought a huge orange one meant for horse feed, which he has filled with empty cans and bottles, crisp packets and goodness knows what else. We did have a conversation when he came home on Friday, in which he said that he didn’t want to leave home at eighteen, so I assured him that we weren’t about to throw him out, he just needs to do some growing up. Billy returned to the subject today. The fact that he is nearly seventeen and that before long eighteen will be on the horizon has shaken him a bit. He did say that he didn’t feel mature enough for seventeen, let alone eighteen and the adult world. Billy didn’t come home last weekend. He texted to say he wanted to go to a friend’s house. I tried to get an address and phone number to check up, which was like squeezing blood from a stone. Eventually he said the friend’s dad (the parents are separated) would be away, but that they were both going to the boy’s elder brother. I persisted in asking for a name, number and address, which I was eventually given. I spoke to the brother, who confirmed that he knew Billy, and that there would be no drugs in the house. I looked up the address on google maps, and it was where I had been told it was. I offered to pick Billy up and take him back to college on Sunday – with his weekly supply of tobacco, but he put me off saying he was getting a lift. He did phone from his digs on Sunday afternoon to say that he didn’t have his key and was locked out, and needed tobacco supplies. He was also cold as he only had a T-shirt on. Quite what I was supposed to do about it I wasn’t sure, but I contacted his landlady who was on her way home, and kindly bought the tobacco en route.

It is very unusual for Billy to go two weeks without seeing me, but during last week I had another text telling me that he hadn’t  been at his friend’s house after all, but at Jane’s. This was the first we had heard of her, but either his conscience had pricked him for not telling the truth, or more likely knew he’d be found out sooner or later, and thought it had better come clean. We wouldn’t have objected, with the usual caveats of wanting to know where he was, so not sure why the secrecy. Billy had apparently had a good time, and had been invited to go back over half term, then Jane will come here for a couple of nights. Having extracted a name I did some googling and was pleasantly surprised that they seemed a nice, regular family (which is more than I can say of the last girl we knew about, where we had two very needy kids together). Billy had said Jane’s family fostered, and I take my metaphorical hat off to anyone who does that. Jane’s mum phoned during the week and we had a good chat. I didn’t let on that Billy hadn’t told us that he was with them last weekend, nor that we hadn’t heard of her daughter until a couple of days before. Apparently he was a charming guest, kind and thoughtful. I was torn between thinking they must have got the wrong child and pride, or maybe it was relief, that he could make a good impression when he tried. Perhaps eight years of private education were not totally wasted if there is at least a veneer of social confidence and politeness. I’d like to think that our values have not been totally lost on Billy. He had even told them that his sibling was transgender, although Jane’s mother was confused about which way, unsurprisingly as Billy would have referred to her as ‘he’ and used her former male name. Apparently Jane has an elder brother with a life-limiting condition, and Billy had made a point of talking to him and introducing himself.

Jo in fact is very bored. She hasn’t been to school since 30th January, and can’t decide whether she is going back to her boarding school at all. She did say something about doing chores if she was allowed to stay at home. We are in a limbo, not knowing whether we should be looking for another educational setting or just giving her a chance to regroup. Jo coming out of school coincided with totally running out of money so we haven’t actually paid school fees either. So far the school have been patient on both fronts.  It seems that being told she couldn’t take sex education classes with the girls was a final straw for Jo. Even the thought of school makes her shake, and she had reduced her life to her bed or duvet on the sofa, thus minimising all chance of anxiety-producing situations. She wanted to go to school on Friday to pick up her belongings and say goodbye to a couple of her girl friends. One faithful friend came back with us for a couple of nights. He is quite clingy and misses Jo, finding it difficult to make new friends. She finds this quite difficult as she likes her personal space, but he has been patient and loyal to her, and they play together much of the time on-line. I think Jo realises that if she ignores him altogether she will find herself almost totally isolated. Another reason for going to the school on Friday was a visit from a solicitor specialising in SEN legislation and tribunals. He explained how the new Education Health Care plans that replace the old Statements of Special Educational Need work. It was useful, and if we are going to get Jo back into her current school or perhaps a unit for children with emotional and behavioural difficulties (an EBD school), we will need to go through the application process for an EHC plan. My heart sinks at the thought as it is distressing, depressing, exhausting and very very time consuming and expensive. It shouldn’t be, but it is. I also met the head, who was concerned and obviously wanted to know what was happening. Talking to Tony later, we decided to see if the school will keep her on the books but suspend fees so that we can divert them into paying for a solicitor (notional fees as we haven’t raised the money as yet). We tried three times for a Statement for Jo in the past – or her primary school did on two occasions and we did the last time, and became increasingly cynical about a system which does not work for children by any stretch of the imagination. In retrospect we should never have gone to a tribunal hearing without legal representation, so we won’t make that mistake again.

When I wasn’t trying to walk dogs or manage the children’s anxieties, I was on the phone to the Department of Work and Pensions and filling in forms the length of short novels for Billy’s benefits. There is an enormous amount of duplication in the process as well as people just messing up. They are nice enough when you speak to them but the systems are not adequate to the task, which creates a huge amount of work for claimants. How Billy is seriously expected at sixteen to manage claiming on his own behalf I can’t imagine. Here I am with a PhD and it takes all my time and energy, telephone skills and perseverance. Given that the benefits are because he has learning difficulties, as do many who apply I imagine, the set-up is impossibly complicated. To relax I have signed up for Desmond and Mpho Tutu’s 30 day forgiveness challenge. I could watch the opening video, which only lasts a few seconds, with Desmond and Mpho laughing together on its own. It is a great de-stressant, with Desmond’s lovely infectious laugh. I can feel my stomach unknotting just thinking about it!