When you are in the middle of a situation it is hard to know which of these two realities one is living. Are things falling apart or falling into place? I guess it always feels as if unplanned changes represent things falling apart, even if experience tells one that such times can be creative. They generate change. Jo is like a chrysalis tucked up in her duvet, waiting to emerge as a butterfly. I suspect that this could be a long and painful process, and unlike the caterpill 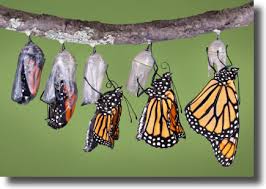 ar who can just wait until the sun comes out in the Spring, Jo will actually have to find the resources to be proactive at some point. The crux of it is that she won’t return to school. It has been an increasing struggle this year, not that it was ever easy getting her there. She has now missed so much of her GCSE work that she has little chance of catching up, which is another disincentive to return. The main problem is a developing social phobia, not wanting to be looked at. Unfortunately our lovely daughter will only continue to become more biologically male, unless and until she can get her head around attending the University College Hospital endocrine clinic and going on hormone blockers. The problem is therefore not going to disappear with the Spring sunshine.

We tried and failed three times to get a Statement of Educational Needs for Jo, so will now need to start again with the new Education, Health and Care needs assessment process. In theory it is more holistic and will look at social and emotional factors, as well has Jo’s base- line cognitive ability. The SEN Statement process was also supposed to take broader needs into account, but in practice these were summarily dismissed. Jo might find the courage to carry on with her education in a much smaller residential setting, with therapeutic support available and a better understanding from all those involved of her complex mix of needs, her strengths and weaknesses. If she was in a wheelchair or was on the autistic spectrum I suspect her needs would be better identified and catered for, although I know that it is increasingly hard for all children and young people with any disability or mental health issue to get support and to find a place in society. The transgender process is just another part of Jo’s complicated but no doubt wonderful jigsaw. I can’t wait to see the finished picture (in this life or from the next!). We were planning a meeting at the school, with social work support and the Virtual School involved, but there seems little point if Jo doesn’t return there. It is hard to know how to plan or move ahead. It is also painful scraping around trying to find school fees on a month-by-month basis, with repairs and other things jobs on permanent hold, when the child is actually at home in bed.

I attended a retreat/conference in Italy and was, most unusually, away for four nights, leaving Tony to cope with both children alone at the weekend. This is not something we aim to do if we can help it. Billy arrived back from college with a friend. The friend had been before when they camped in the woods next to the house. I gather that all three children had some fun playing with B B guns (not something I like as they shoot hard plastic pellets, which I’m always afraid the chickens or other animals could eat). Jo was included, and from the range of pellets around the house and garden they obviously had a wide-ranging battle as well as some target practice. They also seem to have consumed plenty of fish and chips as the food left in the fridge was largely untouched and the debris extensive. Unfortunately, as so often happens, things took a turn for the worse on Sunday. Tony suspects that Billy was smoking cannabis, or something else that he shouldn’t, which makes him extremely aggressive. Apparently he physically attacked Jo in her room, and threw food or drink all over the wall by her bed (the evidence of which will remain until we can redecorate the room at some time in the future). Billy was extremely rude and verbally aggressive to Tony, who managed not to react – much to his friend’s embarrassment. I suspect that Billy’s friends, who all seem a nice lot, are just not used to seeing or hearing someone be so aggressive and rude within an apparently civilised family setting.  Billy is not going to find it easy to keep friends, or be welcome in other people’s homes, if he can’t get on top of this behaviour. I had several requests for money while away, and as usual the money for his train fare seems to have been diverted, presumably for drugs. This is another situation in which it is hard to know how to react.

One decision I did make was not to clean and tidy Billy’s room. I went up on Monday morning intending to do it, but partly through exhaustion, partly annoyance, but also I hope some wisdom, decided that apart from taking a plate and fork down to the kitchen I would leave it as it was. My hope is that if I stop doing things for Billy he will begin to do them for himself. He won’t always have me around to tidy up after him. If I don’t do things for Billy he generally gets very cross with me and sees it as a lack of love and care, which makes him feel very vulnerable. Maybe at some point he will allow me to help him do the clearing for himself. If he felt that he had more control over his environment without relying on others he might be happier. A friend told me that one of the effects of dyspraxia is difficulty not just sequencing, but also generating the action words needed to perform tasks. This makes sense to me as I am aware of telling myself to do jobs one at a time in order to get them done (‘ignore the food and cans and pick up the clothes’, now take aftershave, razors, deodorants etc. back to the bathroom’, ‘get a bag and collect all the tin cans’ and so on). If I need to do this to accomplish a task, I do understand how Billy finds it difficult to even get to the stage of seeing the individual tasks within the whole chaos of his room. What I don’t really understand is why he needs to trash the room so comprehensively within such a short time. One little obsession is removing all his many caps from his cupboard, and hooks on the back of doors, and scatter them over the room, so one of the tasks I usually perform is ‘now find, pick up and put away all the baseball caps’. I have asked him why he does it but he doesn’t have an explanation for this behaviour, other than it is a habit. It sometimes feels as if adoptive parents need to be professional psychologists, rather than just overworked, underpaid, and very tired housekeepers, cooks and drivers.