The ground has some good hard frost at last – needed to kill the unwelcome bugs in the chicken run. It has been a week with some much needed down time. I have been quite tired following surgery last week, and haven’t had the 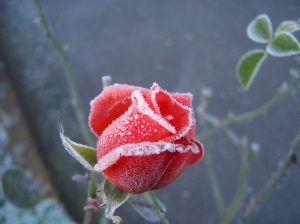 energy to persuade Jo back to school. She seemed to need some thinking time, and after a week in bed has emerged a bit more relaxed, trying to get herself into a less nocturnal rhythm for a return to school on Sunday. She has been thinking about the need for injections if she goes ahead with hormone blockers to arrest the progression of male puberty (fully reversible). Whenever we probe as to whether she had doubts about being a girl she strenuously denies this. It seems to be the thought of injections every twenty eight days as well as the initial physical checkup and blood test that are causing so much anxiety. Maybe she needed this week just to let her subconscious as well as conscious mind come to terms with things. She does have processing problems due to the FASD, but also shows remarkable perspicacity when it comes to explaining what is going on, and her thought processes. Our youngest dog was treated to a frosty early morning walk as Jo seeks to get into a better routine. I think its the first time she has left the house all week. I’ve hardly seen her as we were like the weather men, one in and one out, never both around at the same time. Apart from occasional muttering that there isn’t much food in the house (plenty in fact, but I’m not cooking for her in the middle of the night), she has been very easy and uncomplaining.

Billy had a review meeting in college in Tuesday. I felt for the poor boy with seven well-meaning women giving him advice on what he needed to do to stay in college. Neither his attendance nor work are what they should be, but he just seems to lack the organisational skills to turn the situation around. He is happy enough and his social life seems much improved on boarding school, but it doesn’t add up to the standards the college normally set out. Billy was evidently stressed by the meeting and looked as if he would say anything to get out of the situation, without taking much of it in. As someone said afterwards, he looked a bit like a rabbit caught in the headlights. He doesn’t have a plan B and wants to stay on next year, but there is quite a mountain to climb if he is going to make it. He is fortunate to have high levels of good will and support, but taking advantage of them is another matter. Attachment and trauma, or whatever diagnosis one puts on it, are hidden disabilities but with quite profound effects. There must be many thousands or hundreds of thousands of children and adults struggling with similar problems, meeting with a lack of comprehension and negative judgements from a society that is unaware of the nature of these disabilities. We were pleased that Billy came home today seemingly in quite a good mood. Hopefully in very small steps he is edging forwards into future that he has chosen and is actively trying to shape.

2 thoughts on “Down time”