We all know that our children are likely to have a better grasp of the latest gadgets than their parents. Unfortunately they don’t always know or care where their technical prowess might lead. Last night (while writing my first blog post) Jo (aged 14) came into my study clutching her iPhone to demonstrate that if she asked Siri, the voice-controlled guide, what her name was, it gave a funny answer. They had obviously spent a great deal of time at her boarding school that week taking each other’s phones and adding embarrassing names. At that point she grabbed my phone and ran off with it, despite my protestations to come back. She did a few minutes later, accompanied by Billy (16). Both kids were still in their night clothes having emerged like bats to forage at dusk. When pressing the button to activate Siri to ask ‘What is my name?’, Siri replied, ‘Your n 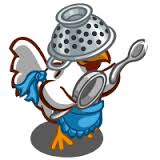 ame is Ann but you wish to be known as “chicken warrior”‘ (which I didn’t, but not a bad avatar name if I’m looking for one). Billy assured me that Jo’s version of my name had been something unrepeatable, which I can well imagine. I didn’t worry too much about it as I don’t generally go around asking Siri my name. This morning, however, when using my iPad to check emails, I noticed to my dismay that they were all sent to and from “Chicken Warrior”, including those from work. I went into my email accounts and tried to change it, but they displayed my name correctly. I went to moan at Tony, my husband, only to discover that he had been present when the changes had been made. There is form here – ‘letting’ or rather not being able to prevent, Jo from doing things she shouldn’t, so I couldn’t stop myself letting out a a ‘why did you let her do it’ cry of exasperation. I do know, to be fair, how quick she is and how hard it is to stop her. The wonder of Apple products is they way they sync across platforms, but it is a serious glitch if its possible to change someone’s email profiles across all accounts and devices simply by giving Siri a voice instruction, which didn’t require my passcode to get into the phone. I had a few more moans, and when Billy eventually appeared for food Tony got him to change it back to something resembling my name via the Contacts address book. I don’t really mind being a “chicken warrior” but trying to preserve some sense of professional credibility isn’t enhanced by the epithet.